First, we want to say welcome new followers!!  We love comments and questions so please chat it up with us!  Let’s initiate you to the Chi Organic Girls club with a giveaway. 🙂

1) Have you been getting your eat on at Restaurant Week? 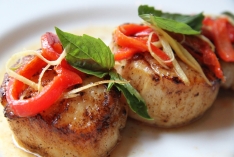 2) Are you getting rewarded for getting your eat on?

We’re sure one of these answers is a resounding and forlorn no.  Enter Spring Rewards to the foodie rescue!

Spring Rewards will feed you people and that’s not all.  They also offer a service to get that wallet in order.  We know ours is packed full of rewards cards that are often forgotten when we need them most (we’re looking at you, Walgreens Balance Rewards).  To solve this crisis, you enter your debit or credit card into their secure system in addition to those pesky rewards cards and Spring Rewards automatically tracks those rewards for you.  Merchants who partner with Spring Rewards may also give you a lil sum’ sum’, like cash back, directly on your card, for being so loyal.

Now, to fill your #crw hole in your pocket and stomach.  To enter, follow these picto-instructions. 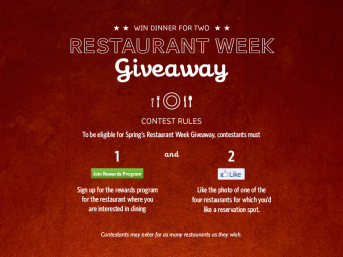 Spring Rewards is gifting out dinners for two at places like Roka Akor, Keefer’s, Red Door & Tanta.  Does anyone want to take us?

Get started here and happy eating!

There is nothing better than Sunday brunch.  Even better is not waiting for Sunday brunch…a very rare thing in Chicago, much like unicorns.  When we arrived to the Gold Coast to get the scoop on La Grande Vie’s brunch service, we were a bit perplexed on how to enter as it is situated in a apartment building.  Once we jumbled our way in, we were intrigued by the loungey space and gorgeous chandelier hanging over the entryway. 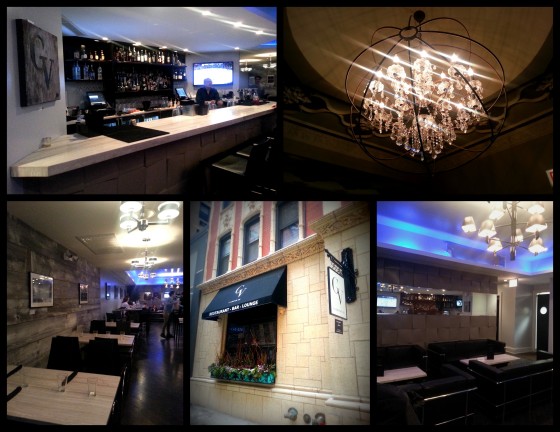 We were immediately greeted, seated and whisked away to some awesome veggie brunch choices.

We started first with the LGV Panini, sans Ham, with creamy avocado, swiss, scrambled eggs and roasted tomatoes.  The panini was big enough for us to split and came with slightly spicy, crispy potatoes.

Next came the Frittata with asparagus, red pepper, onions, and cheddar, a solid and hearty dish but not as tempting as our other offerings.  Dipping the egg and hidden potatoes into La Grande Vie’s homemade fresh sweet and chunky ketchup made this dish more interesting. 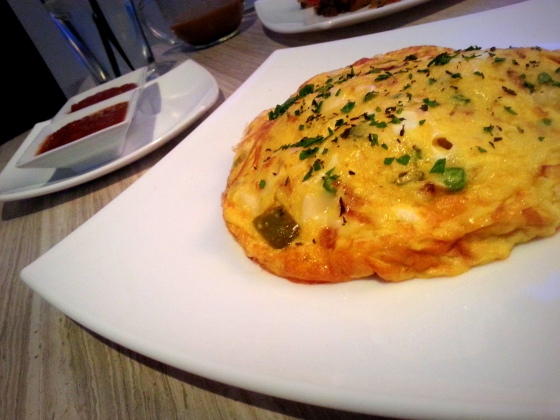 The absolutely best part of our experience was the Orange French Toast with orange compote and triple sec maple syrup.  We need to preface this with an important point.  Neither one of us is bowled over by orange flavored breakfast goods but La Grande Vie got this dish supremely right.  It has all the right french (toast) curves.  The bread was crunchy on the outside and delectably soft and custard-y inside and our pick for one of THE BEST FRENCH TOASTS in the city.  The marmalade like topping was very mild and complementary.  A bigger surprise was the candied orange peel with it’s refreshing juicy pop of citrus that added a contrasting flavor profile.  Aww man, now we are thinking about this french toast at 9:37 at night and wishing it was here to comfort us in this polar vortex. 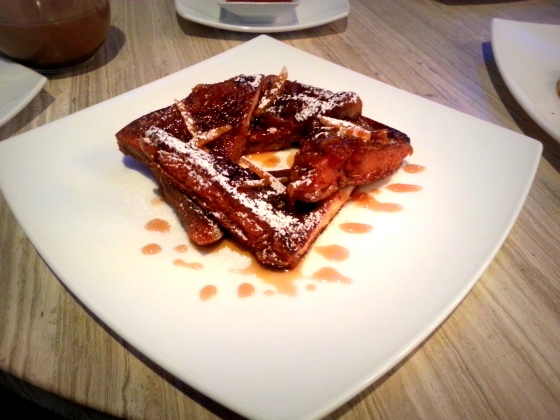 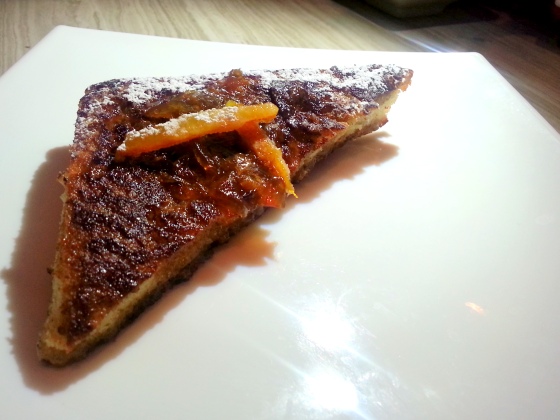 Cameron, our waiter, was both attentive and helpful throughout our meal.  We liked that nobody hovered and bothered us while we ate but we also didn’t feel ignored.  During our stay, we noticed a separate room with a party popping in it.  There was a networking event for gay men going on but unfortunately, we couldn’t really sneak in unnoticed.  Mark Buot, general manager, explained that La Grande Vie was trying it’s hand at new events.  The room is also available for no charge if you need a spot for a swanky baby or bridal shower.

We’re a little bummed that it’s Monday but hey, at least we made it through Monday and that’s only 5 more days til brunch comes back around.  Has anyone else experienced the culinary delights of La Grande Vie?  If not, get over there..and grab us some french toast in case we can’t get out snowy driveways.

If you’re in Memphis, make sure to see the Lorraine Motel, the assassination site of the legendary Dr. Martin Luther King, Jr.  While standing in silence with other visitors, it’s hard not to wonder what he else he could have accomplished if his life hadn’t been taken so early.  His inspiration continues as people dedicate their time on his birthday to help improve their communities.  Volunteerism not only helps those who are receiving but also those who give their time to others.   Each person can find some cause they feel passionate about and the decision to serve could positively affect their physical and emotional health.  What’s not to like?!

Today, we would like to give snaps and back pats and kudos to one of our fave volunteer organizations, Bright Pink.  Bright Pink is a unique non-profit in that it focuses on breast cancer awareness and risk reduction in addition to supporting high risk individuals.  They utilize tech and social media for doing good.  Instead of using texts to send pictures of cats wearing people clothes, they send you reminders and tips to check your breast health.  Ladies, take action by assessing your risk here. 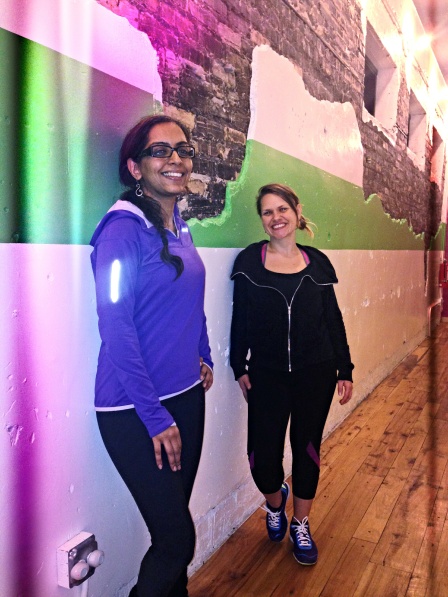 Bright Pink practices what they preach with volunteers as well.  Their volunteer events promote healthy choices such as exercising, eating cancer fighting foods, and workshops that encourage regular breast monitoring.  For example, this past Thursday, we joined other dedicated Bright Pink supporters at a crazy dance-athon at All About Dance.  It was much appreciated that the lights were low as our dance instructor had us rolling our hips and doing some killer floor work that made us wish we had a referee time out whistle to recover from the cardio.   Luckily, Bright Pink head of volunteer events, Brynn, provided us with Vitamin Water and Pretzel Crisps to motivate us to class completion.

So how have you served others this year?  It’s not too early or too late to help!  Learn more about volunteering with Bright Pink here. 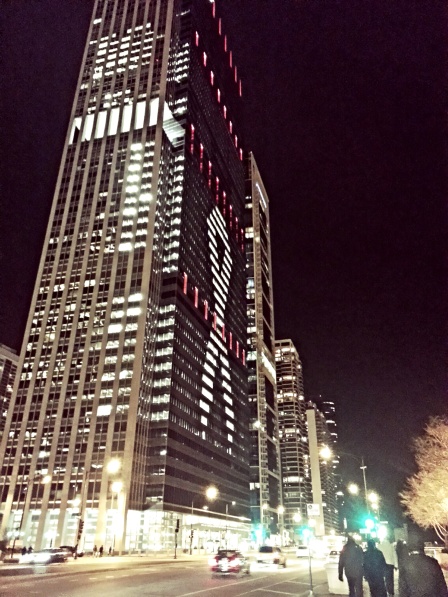 2014 has already been a whirlwind of activity.  So much so, we didn’t even have time to sketch out some resolutions to ditch after January.  One thing that we consider a continued necessity in the big ’14 and not a temporary resolution is practicing yoga.  Both of us initially connected over our interest in not only getting some exercise at yoga class, but also reaping the relaxing benefits of being on the mat.  As relaxing as it can be,the dreaded asana, chaturanga, has never been the yoga move that made us swoon.  In fact, it has been of particular frustration at times, especially after 12 Sun Salutations  in a row (*shaking fist at yoga teachers!!).

Chaturanga (chah-tuur-ANGH-uh) Dandasana (dahn-DAHS-uh-nuh) means “four limbs staff pose” and is part of the sun salutation sequence.  Corepower Yoga in Oak Park/River Forest recently put on a Chaturanga workshop and we were intrigued as well as afraid.  Mon ended up welcoming a new family into the world the eve of the workshop (YAAAY!), so I was left on my own to brave the unknown.

Julia and Laura were the fearless yoga leaders who walked the class through a crazy amount of variations of chatarungas.  Some of the most important points they made were*:

1) No need to do chaturangas every day.  This could lead to a possible tennis elbow injury or overuse of the shoulder (aka dang my rotator cuff is jacked).

2) A strap could be your best yoga bud for this pose.  If you wrap it around your forearms, when you go down to the bottom of the chaturanga pose with your 90% elbows at the sides of your ribcage, it gently pushes on the front of the rib cage and shows you if you’re in the right position.

*Since I am not a personal trainer or yoga teacher, do not take my advice and start slugging it out as I don’t have to money to pay for your urgent care bills.  Here’s Mind Body Yoga’s step-by-step how-to on correct form or watch the video by Lululemon.

I was surprised because we actually got a full workout during the workshop and talked through all these variations of chaturanga.

Even if you’ve been practicing yoga for a long time, I think it’s pretty essential to get some walk through on proper form and in my yoga class on Sunday, I felt more confident and comfortable when completing my chaturangas.  Want to get your own yoga scholar time on?  Corepower Yoga is being awesome to the community and offering another free workshop on February 8th for back bends.  Contact the studio for more details.

Thanks to Julia, Laura and Morgan, studio owner of Corepower Yoga OPRF, for hosting me.  See y’all on the mat!

Oh Twitter,  how we love thee.  Recently, the Chicago Food Scene held a Twitter poetry competition for free Blaze pizzas.  We dug deep back to our middle school Haiku writing days  and typed a clever pizza ditty….and won!!   Once our coupons came, we gleefully braved the snow to try the “new to Chicago” casual pizza chain, Blaze Pizza, situated in Boystown right near the El stop.  We weren’t really sure what to expect when we entered but the staff hollered out a welcome and invited us to come closer.

As we shyly peeked around, they detailed the Blaze pizza process for us.  The fine art of pizza creation is set up in an assembly line format.  Patrons can pick their own pie toppings and sauce or choose a signature ‘za and watch while it is made.  Pizzas are 11 inches of thin crust glory and take only 3 minutes to cook.  We were intrigued by the gigantic oven and learned that 12 pizza could fit inside which brings to mind sitcom hijinx of craaazy pizza cooking.  The oven man assured me that he avoided that magnitude of pizza multitasking.  The oven does, however, cook pizzas at a blazing (get it?!!!?) hot 800 degrees. 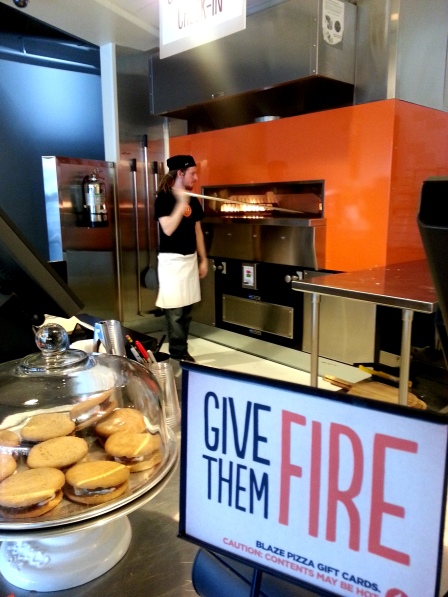 There were a ton of signature veggie pizza options available to us as well as gluten free and vegan substitutions.  We decided on the Red Vine, with fresh mozzarella, cherry tomatoes, basil and chunky red sauce, and the Green Stripe, with pesto sauce, arugula, and garlic minus the chicken. 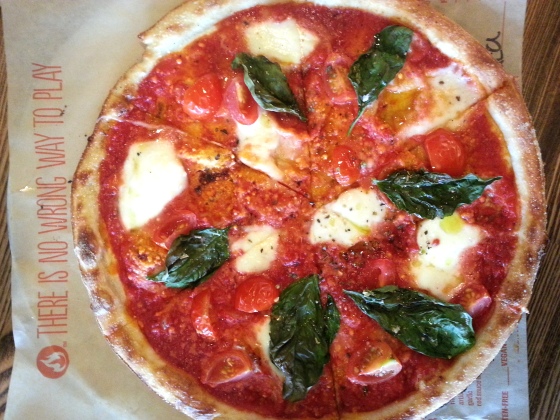 Blaze Pizza – “Green Stripe” with pesto sauce, arugula, and garlic minus the chicken

Pizza Highlights: Blaze Pizza is a real departure from Chicago style pizza and a real good one at that.  The crust was light, crispy and a titch garlicky. Our wallets were happy because their pizzas only cost 8 bucks and we each walked out with leftover slices.  We also tried the S’mores pie, a chewy marshmallow with melted chocolate in between 2 British biscuits.  It had appropriately crumbly texture but we decided it could have used a quick pop in the oven.

Status: Liked, retweeted and plused, we loved Blaze Pizza and will be back to make our own creation.  Thanks to Blaze Pizza and Chicago Food Scene for choosing us as the creative poetresses that we are and giving us pizzas instead of an award.