Superfoods are all the rage right now but why shouldn’t they be?  They are super after all, super at making your body feel spectacular.  In a world of fast food, we’re all in need of healthy heros like Sambazon! 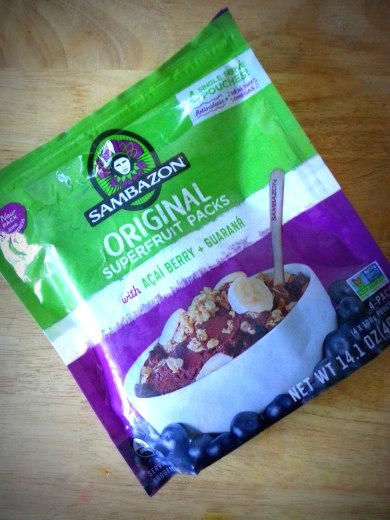 The brand Sambazon focuses on fair trade, non GMOs and sustainability of the cute lil acai superberry.  We recently tasted two of their acai breakfast (or any time of day, for that matter) options and simply swooned over their hunger pang crushing powers.

The first sample was the chocolate, almond and coconut milk protein smoothie.  Lactose issue folks and vegans can rejoice over this tasty drink containing 8 grams of vegan protein to get the day started.  We are a big fan of coconut milk as it adds a rich touch that makes the drink feel decadent.

The second option, Acai Berry Superfood Smoothie Packs, breaks down to the bare essence of the superfood, fair trade organic acai berry pulp, in a convenient frozen ready to blend serving.  We love to make green smoothies to get a pop of spinach or kale in the morning and incorporated the pack into our easy and quick green recipe with coconut water, spinach and blueberries.

Your not too sweet not too sour SUPER green smoothie has been created!

Like the Sambazon Protein Smoothie but wanna make your own version?

Voila!  3 breakfast options to break from your egg and granola routine.  Ready to get in touch with your inner champion?  You can find Sambazon at oh so many retailers like Marianos, Jewel-Osco, Whole Foods, Walgreens and even (*gasp*) Walmart!  They are everywhere :).