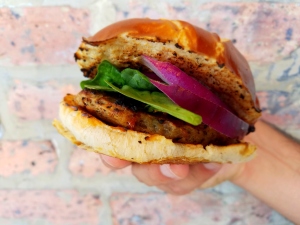 July is National Grilling Month and it’s been a scorcher in Chicago.  With all the BBQs and back yard grilling bonanzas this month, adding some veggie burgers to the mix can happify those who don’t wanna have a cow.  Humans are naturally omnivores, meaning we’re down (and hard wired) for some vegging out.  Plus, eating more veggie based meals can help the environment, reduce cancer risks, minimimize exposure to meat based antibiotics, and improve the quality of life for animals.  But lettuce not forget taste!  There isn’t mushroom for a bad tastin’ veggie burger on the grill. 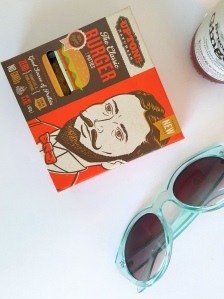 Upton’s Naturals, an independently owned Chicago based company, dedicates themselves to providing delicious veggie based meat alternatives for the vegan and vegetarian community in Chicago and abroad.  They just celebrated their 10th birthday and certainly know how to turnip any grilling occasion.

Their veggie burgers are one of the newest additions cropping up on their rotation.  So you may wonder, how does Upton’s Naturals: The Classic Burger stack up?

Battle of the Burger:

Upton’s Taste and Texture: Upton’s Burger tastes a lot like their other seitan blends that we’ve had before.  There is a slight smoke flavor with a peppery finish in the patty.   It’s a hearty veggie burger, not one of those ones that falls apart, and it easily cooks on the grill in a short time.  Can’t beet a quick cooking meat free burger to get those planty vibes! 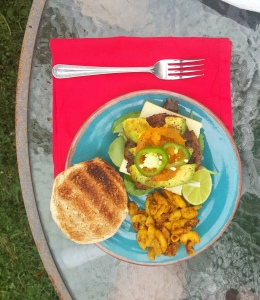 So who won?  Is this your garden variety knock out?  Upton’s has less fat, calories, and cholesterol than than a traditional beef burger.  It also has more fiber.  Upton’s is kosher, lactose free and vegan so it digs away at different dietary needs.  Note: Upton’s burger is NOT gluten free so traditonal burger takes the medal for that category. 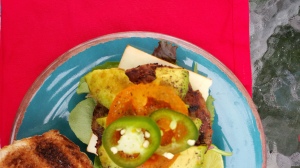 Are you ready for your BBQ guests to cheer “Olive Veggie Burgers!”?
Upton’s Naturals’ Classic Burger is planting itself at natural retailers throughout the Midwest for $3.99 for a 2 burger box. Click HERE for a store locator.  Swinging by the Chi?  Sample the classic burger or many other vegan delights (jackfruit tacos, vegan bacon mac and cheese and more) at Upton’s Breakroom in Chicago’s West Town neighborhood.  Visit www.uptonsnaturals.com and find @UptonsNaturals and @UptonsBreakroom on social media.